So many AirPods have been lost in New York City subway tracks in recent months that the MTA is considering initiating a public service announcement urging commuters to refrain from taking AirPods on or off while entering or exiting trains, a spokesperson for the transit agency told The Wall Street Journal. 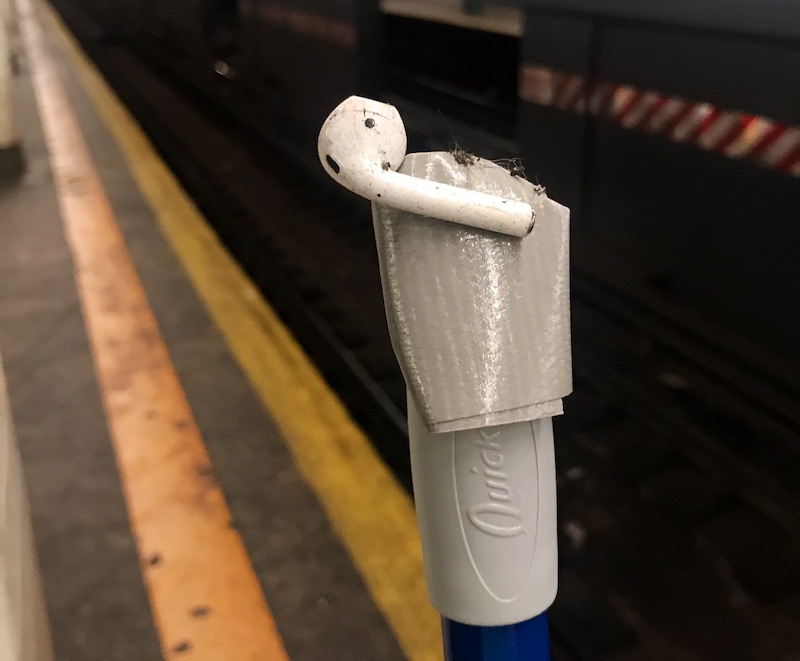 Ashley Mayer recovered her AirPods with a broom and duct tape

The PSA would hopefully alleviate the delays caused by the numerous AirPods that fall between the cracks each day: "They're tiny. They're hard to find," said Steven Dluginski, an MTA maintenance supervisor. Given the darkened tracks where they drop, he said, "the only saving grace is that they're white."

AirPod rescues from New York City subway tracks ramped up in March, when Apple released a new version, Mr. Dluginski said. This summer has been the worst, possibly because the heat and humidity on subway platforms makes the ears and hands of New Yorkers pretty sweaty, he guessed.

Transit workers use a pole that extends to about 8 feet and has two rubber cups on the end that can be squeezed together to grab small objects. The "picker-upper thing," Mr. Dluginski called it.

Around noon on a recent Thursday, Mr. Dluginski's team had received 18 requests to fetch lost items. Six were for AirPods. "It's job security, as far as we're concerned," the maintenance boss said.

While the location of AirPods can be tracked using the Find My iPhone app, the earphones often become trapped in hard-to-reach places due to their small size. This led The Wall Street Journal to highlight the extravagant measures that some customers have taken to recover their lost AirPods: Passenger Ashley Mayer recently live-tweeted a track rescue in a lull between passing trains. One photo, featuring the caption "game on," showed her purchasing a broom and duct tape. She used the contraption to nab the AirPod from the tracks, which can be dotted with rats.

In an extreme case, well-known Apple analyst Gene Munster admitted that he has apparently lost 10 pairs of AirPods. Apple charges $69 for a replacement AirPod in the United States, totaling $138 for a pair. Replacement charging cases are also available for $59, while the wireless AirPodscharging case is sold separately for $79.

Amazing ! Can You Believe If Someone Disassembled Airpods? How Apple Dominated the World Cup Despite not Being an Official Sponsor Tim Cook Calls AirPods ‘A Run Away Success’ Apple Releases iOS 10.3Beta 5 for iPhone and iPad Apple Releases iOS 10.3.2 Beta2 for iOS Developers Apple Rolls Out iOS10.3 Beta, Brings Find AirPods Support to iPhone Apple Will Delay to Sell Wireless Airpods Tap Your AirPods to Skip A Song with iOS 11