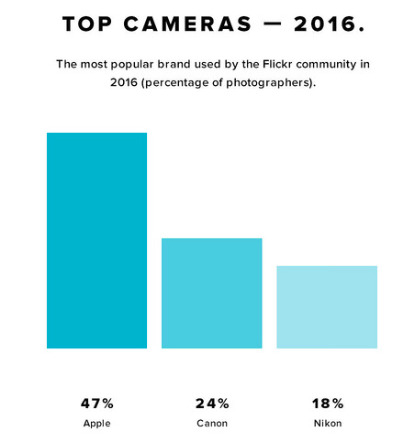 In its annual report for 2016, Flickr noted that, "as in previous years, smartphones have grown as the dominant device of choice, while point and shoot and DSLR cameras both lost ground."

Cameraphones grew to 48 percent of all photos uploaded in the year, compared to 39 percent in 2015. DSLRs shrank from 31 percent to 25 percent, and point and shoot cameras fell from 25 to 21 percent of users' uploads.

Just one year ago, Apple accounted for 42 percent of Flickr photographers, a percentage that's since grown to 47 percent.

Apple's focus on high quality sensors, lenses and in particular advanced silicon logic in its A-series Application Processors has enabled the company to gain a strong reputation among both professional photographers and casual users who want an easy to use, but ultra simple tool for capturing images.

This year, Apple has capitalized on its advanced camera imaging savvy to bring dual camera imaging to its best iPhone 7 Plus, along with a new Portrait mode that uses a dramatic depth of field effect for DLSR-rivaling background bokeh that focuses the viewer's attention on the foreground subject.