All four iPhone 15 models slated for release next year will feature a pill-and-hole display design that replaces the notch, according to display industry consultant Ross Young, who has a respectable track record with display-related information. 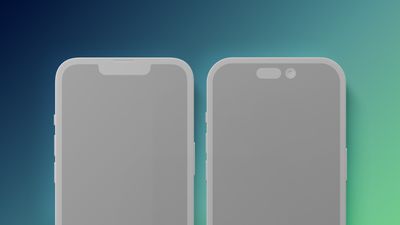 In a tweet, Young shared a roadmap that indicates both standard and Pro models of the iPhone 15 will feature the pill-and-hole layout, which refers to a pill-shaped cutout for Face ID sensors and a hole for the front camera. By comparison, only iPhone 14 Pro models are expected to switch to the pill-and-hole design this year, with the standard iPhone 14 models expected to retain the same notch as iPhone 13 models.

Based on the technical challenges remaining for under panel cameras to meet discerning brands quality requirements as well as panel manufacturers' cost requirements, I still believe this roadmap makes sense for the iPhone. pic.twitter.com/3ck5X3sVcL — Ross Young (@DSCCRoss) May 10, 2022

Apple is expected to introduce the iPhone 14 lineup in September, barring any major supply chain disruptions. For the Pro models, an upgraded 48-megapixel rear camera is expected to enable 8K video recording, up from 4K currently.

Young, CEO of Display Supply Chain Consultants, has in the past accurately revealed that the sixth-generation iPad mini would feature an 8.3-inch display and that the 14-inch and 16-inch MacBook Pro models would feature ProMotion.