Pre-orders for the iPhone 13 mini, ‌iPhone 13‌, iPhone 13 Pro, and ‌iPhone 13 Pro‌ Max will kick off on September 17 at 5 a.m. Pacific Time, allowing customers to purchase any iPhone model in Apple's 2021 ‌iPhone‌ lineup. 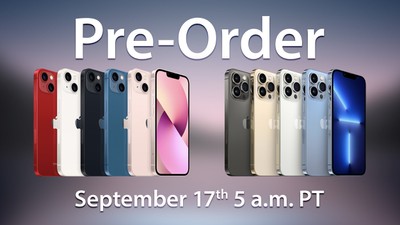 Apple is planning to make the new devices available in multiple countries around the world simultaneously, so we've created a list of when pre-orders will kick off all around the world.

We haven't listed every time zone for every country, such as in Canada, Russia, and the United States, nor have we listed every available pre-order country, so make sure to double check your specific time zone so you're certain you know the exact time that pre-orders will kick off. A time zone converting website is a useful tool for confirming accurate pre-order times.

Reports detailing Apple’s ‌iPhone 13‌ manufacturing preparations suggest that Apple has been taking steps to prevent launch delays. That said, it's best to pre-order the ‌iPhone 13‌ model you want as soon as possible if you're aiming to get a new device on release day.

‌iPhone 13‌ pre-orders will be available on Friday, September 17 and all four devices will launch one week later on Friday, September 24. These dates apply to customers in the United States, Australia, Canada, China, Germany, India, Japan, the UK, and more than 30 other countries and regions.

All of the ‌iPhone 13‌ models will subsequently be available in Turkey on Friday, October 1, followed by Malaysia, Mexico, South Korea, Thailand, and select other countries and regions beginning Friday, October 8, according to Apple.