Apple is researching expanding the 2019 Mac Pro's distinctive "cheese grater" lattice design to other devices, including the iPhone and a "trashcan"-style ‌Mac Pro‌, according to a newly granted patent filing. 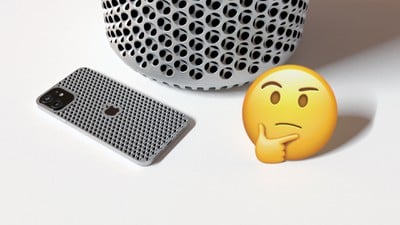 Apple introduced an innovative milled lattice pattern on the ‌Mac Pro‌ and Pro Display XDR in 2019, which is created by machining a spherical array into the internal and external surfaces of the aluminum. The result is a lightweight lattice pattern that maximizes airflow while creating an extremely rigid structure.

The new patent, first spotted by Patently Apple and granted by the U.S. Patent and Trademark Office, is titled "Housing construction" and covers expanding the lattice pattern to other devices, such as the ‌iPhone‌. 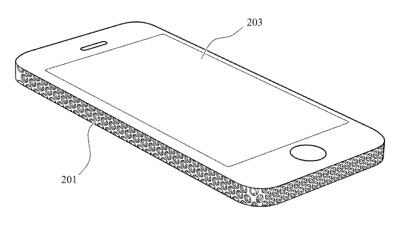 Apple believes that its lattice pattern presents a solution to this problem, since it increases a device's surface area for better cooling and can more effectively "conduct heat away from a component of the electronic device positioned substantially adjacent to the first surface of the body."

These enhanced levels of heat removal, as described above, can result in significant performance gains for the electronic device and can allow for the use of components or operating levels that heretofore may not have been achievable with existing three-dimensional structures.

In improving cooling, devices with the lattice pattern could push their processors to higher temperatures for better performance.

Illustrations included in the filing demonstrate how a miniaturized version of the lattice pattern could be milled directly into the ‌iPhone‌'s outer frame and rear. 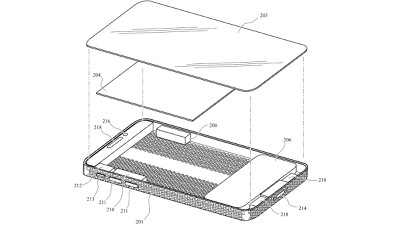 As well as significantly improving thermals, this could also improve grip, "provide a unique and pleasing look and feel," and give "a pleasing experience when handling the device."

In some cases, a three-dimensional structure can include a relatively intricate repeating pattern that, in addition to enhancing heat removal capabilities and providing stiffness, provides a visually interesting or aesthetically pleasing effect to the user. Such a three-dimensional structure, for example when used as a housing, can also include a variety of colors on one or more regions of the housing to enhance the visual appearance and provide a pleasing aesthetic experience to the user.

Another advantage of the lattice pattern is improved structural strength without increasing the thickness or weight of components.

Another embodiment covers embedding the lattice internally inside the ‌iPhone‌ to improve rigidity and strength, allowing "the electronic device to be used over a long period of time while maintaining dimensional stability." 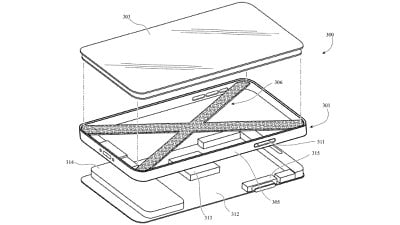 The patent also mentions how the lattice structure "can act as shielding for the electronic device, while still allowing for air flow there through," particularly as a shield against electromagnetic interference (EMI) and/or electromagnetic compatibility (EMC) noise.

In addition to the ‌iPhone‌, Apple appears to have resurrected the divisive design of the 2013 ‌Mac Pro‌, informally dubbed the "trashcan" ‌Mac Pro‌, to demonstrate alternate embodiments for the lattice pattern. 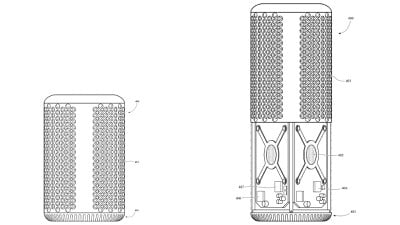 Given that the lattice pattern debuted on the 2019 tower ‌Mac Pro‌, it is interesting to see some of the latest ‌Mac Pro‌'s design aspects implemented on an older model.

Although reversion to the trashcan-style design may seem more likely amid the transition to Apple silicon for a next-generation ‌Mac Pro‌, the machine is in fact expected to look more like the Mac mini.

While patent filings cannot be taken as solid evidence of the Apple's plans for actual consumer hardware, they can provide an interesting insight into the company's areas of research. At a minimum, this patent indicates that Apple may be planning to bring its unique lattice pattern to more devices in the future, but only time will tell.

Apple Still Signing iOS 11.3 Beta 5/6, Downgrade to It to Jailbreak Your iPhone How to Download Apple’s Official iOS IPSW with One Simple Step? Backup Your iOS Device When It's Disabled or in Password in Normal Mode ICCID Activation Bug can Factory Unlock Any iPhone with a Turbo SIM iFixit Releases Fun x-ray and Internal Wallpapers for iPhone XR iPhone X to be Available in New "Blush Gold" Color on Jan, 2018 PanGu Won’t Release iOS 10.3.1 jailbreak Tool? Apple iPhone 7 Plus with Leaked Photos and iPhone 7's Packaging Box